11
The COVID-19 Pandemic's Impact on Bankruptcy Volumes
04/14/2020 04:00 PM Posted by: AIS
Based on historic trends, when annual unemployment rates increase, bankruptcy filings will follow. AIS Law expects a surge in bankruptcies in late 2020 and early 2021. With multiple relief programs put in place to slow the impact, one could anticipate a lag. However, now is the time to start preparing.

As the figures of confirmed COVID -19 cases in the United States continue to grow, the true extent of this crisis is becoming more and more apparent. Since the immediate focus of the government is on the health and safety of its citizens, almost all Americans are ordered to stay home. While it will surely help us to get through this immediate health crisis, its wake could be felt for years to come.As doors to firms, restaurants, retail stores, theaters, and other establishments are closed, either voluntarily or in response to emergency orders, the immediate brunt of the economic fallout is borne by workers and small businesses. According to Bloomberg, the sudden stop in activity has experts forecasting that the economy will experience its largest contraction in the second quarter of 2020. Bloomberg analysts anticipate around 20 million people will be unemployed by July.

Both the Federal Reserve and the government have taken steps to lessen the economic hardship. In order to keep markets functioning and borrowing costs low, the central bank lowered benchmark interest rates to near zero and agreed to buy unlimited amounts of Treasury bonds and mortgage-backed securities. President Trump signed the largest relief package in history, which would provide $2 trillion in support to small businesses and many Americans. These are great measures, but will the financial aid arrive fast enough?

As we begin to see the statistical picture and the lockdown persist, we understand it will be more difficult for the economy to recover. Experts such as Forbes, Bloomberg and S&P say the recession has already arrived. Many might disagree with this statement, as historically, the term recession has only been used upon two consecutive quarters of decline in a country’s gross domestic product (GDP). However, it’s difficult not to address it as a recession when financial models continue to reflect consistent data.

According to the US Department of Labor, another 5.2 million workers filed for unemployment benefits last week. This follows the 6.6 million in week ending in April 11, 3.3 million and 6.9 million the previous weeks. The last month has shown the largest increase in recorded claims since the Labor Department began tracking data in 1967. 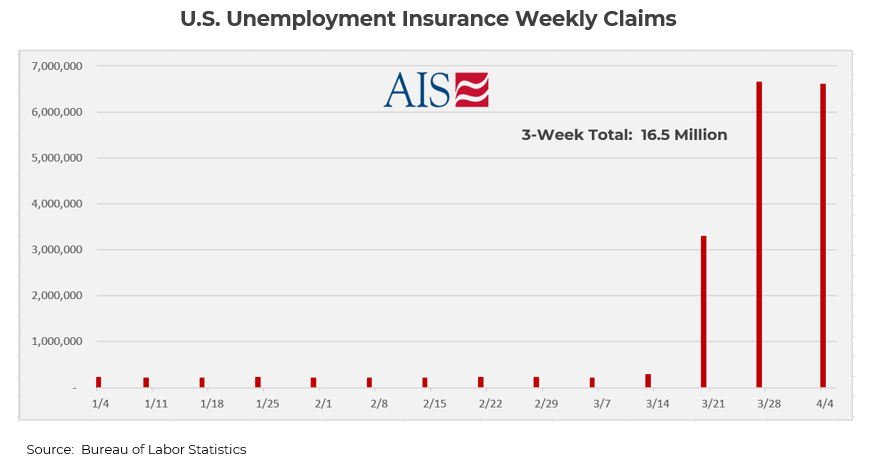 Based on historic trends, when annual unemployment rates increase, bankruptcy filings will follow.

AIS Law expects a surge in bankruptcies in late 2020 and early 2021. With multiple relief programs put in place to slow the impact, one could anticipate a lag. However, now is the time to start preparing. Many creditors have started evaluating strategic partnerships to help process large volumes, in the event bankruptcies were to spike. Partners like AIS Law, who leverage legal technology and offer uninterrupted service and at a competitive price, will be best positioned to support financial institutions with overflow work.

The AIS Insight Report is a proprietary report created by AIS using data derived sole from information obtained by the Federal Bankruptcy Court System and the latest in bankruptcy analytical tools. 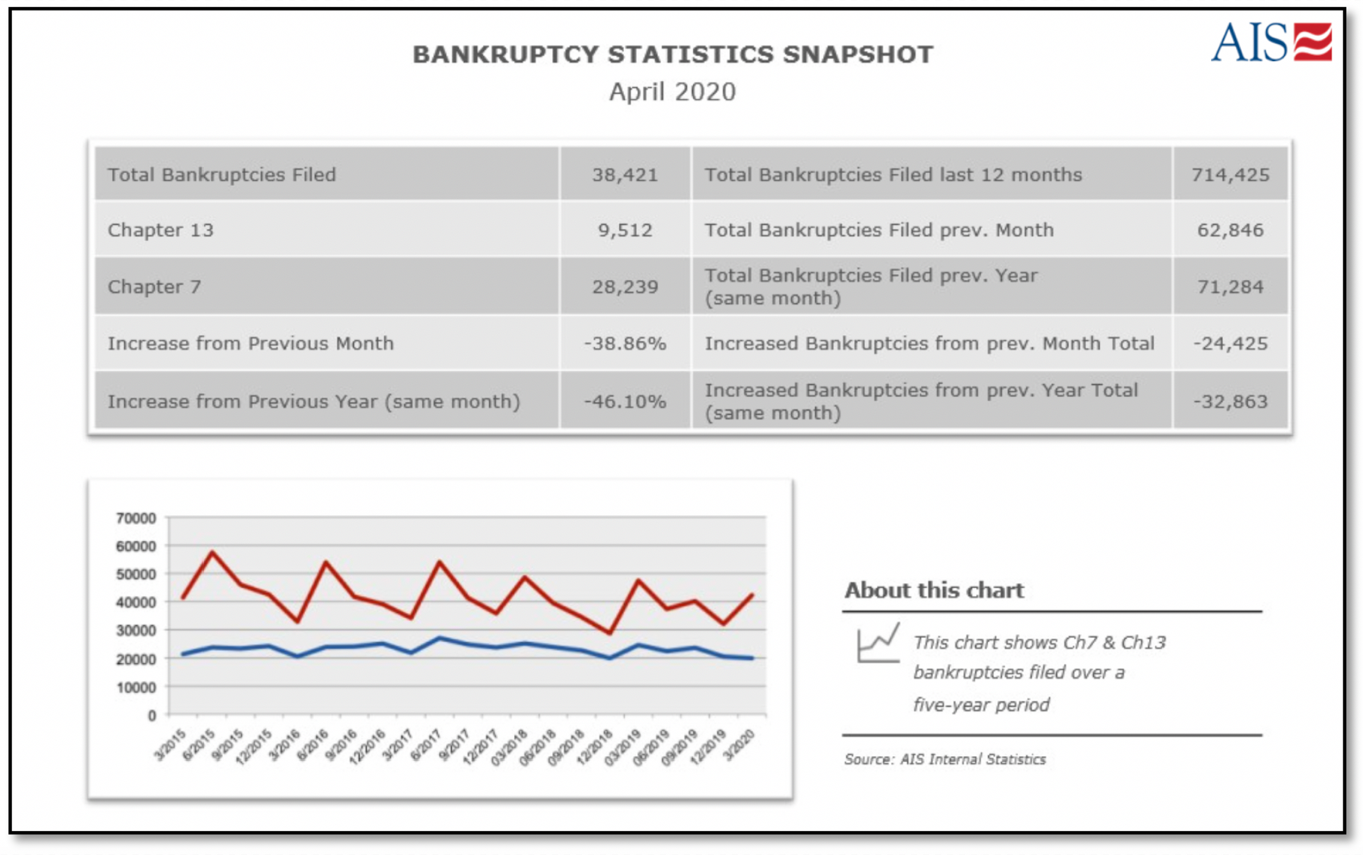 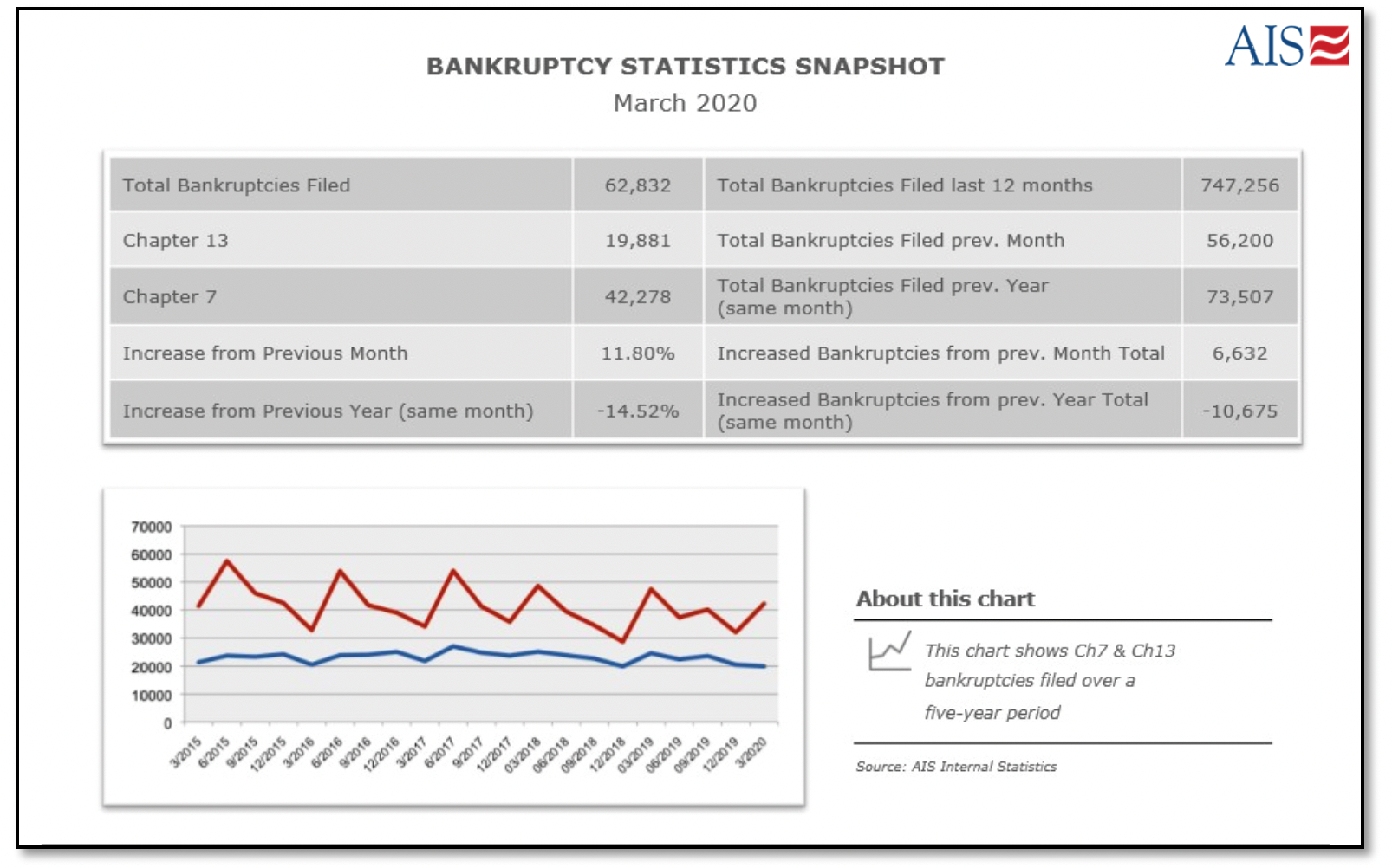 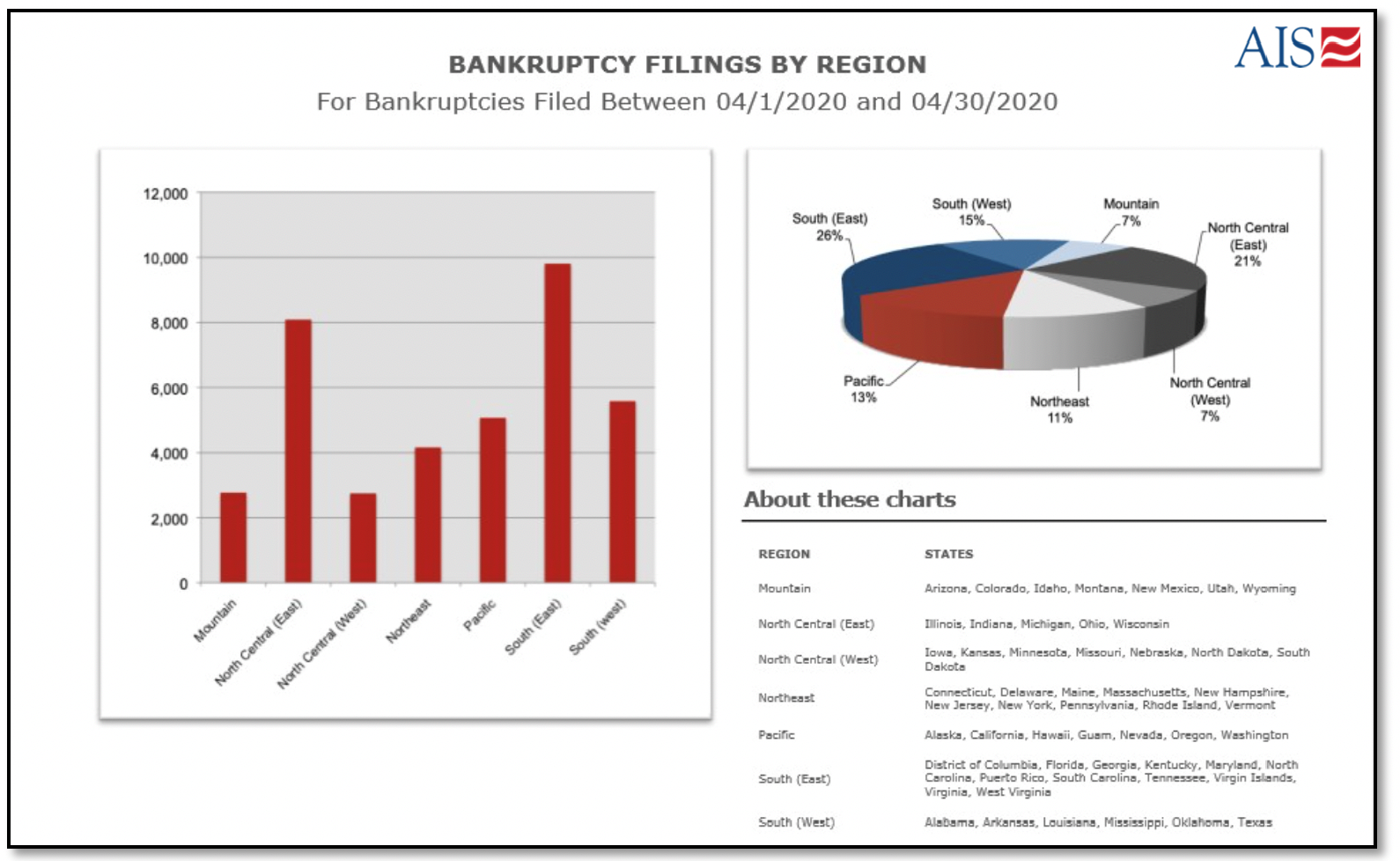 This is now the second consecutive month where we have seen a significant decrease in filings from 2019 to 2020. The dip in bankruptcy filings during the second quarter are attributed to the COVID-19 shelter in place initiatives throughout the United States. As these precautions are gradually lifted, a backlog of bankruptcies are expected to follow.